Will the beast devour the lovely Tulsi?

Tulsi Gabbard and her collaborators are on the cusp of self-discovery. 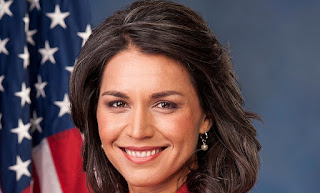 Meanwhile Greens watch with interest. The world shall soon see, once again, what happens to those attempting to reform the Democratic National Committee from within.

The Democrat Party's "Unity Reform Commission" meets today and as Tulsi Gabbard notes: “This is our last opportunity to make our voices heard before the rules and bylaws committees begin to meet to implement changes that will affect the 2018 and 2020 elections.”

Gabbard, like many progressives, is calling for changes in the primaries, apparently in an effort to make them more open and accessible. She and her supporters also want the organization to eliminate superdelegates and to make the leadership “transparent, fair, and accountable.”

Many Greens, myself included, believe that had the DNC actually been transparent, fair and accountable, Bernie Sanders would have been President rather than Donald Trump. Progressives, at the least, would have had a much greater say in the party’s agenda, but as we all know, that did not happen. So now, in a last ditch effort, Gabbard’s group is calling on progressive Dems to sign a petition calling for all of the above changes.

Gabbard noted that Senator Bernie Sanders' presidential campaign “started a movement, bringing the American people together around ending our costly failed regime change wars overseas, implementing a $15 minimum wage and Medicare and College for All, protecting our water and environment, and investing in clean, sustainable energy.

While I think Sanders’ record on regime change is dicey, much of the above is true.

“The American people are also in agreement, across party lines and ideologies,” she said, “that the backroom dealing and pay-to-play politics of our time are simply unacceptable.”

As I understand it the Unity Reform Commission is supposed to have meant a compromise between supporters of Hillary Clinton and those of Bernie Sanders. Yet the Tulsi states in her plug for the petition: “The DNC’s approach of casting out those who haven’t fallen in line with the establishment and are demanding real reform, is destined for failure.”

I think we can all say “Amen” to that,  We may be on the cusp of discovering just how big that failure rift may or may not be. If Tulsi is totally dissed by the party, the Greens could gain some supporters. On the other hand, if they are sucked in to the schemes of the DNC, those progressives may become all the more entrenched along party lines.

Progressives inside and outside the Democratic Party will be watching with interest. Should Tulsi and her progressives get shut down or locked out of the party elite, as expected by many, myself included, I trust that Gabbard and others may find a warm welcome in the Green Party where they belonged all along.