WHY I AM NOT A DEMOCRAT (or a Republican)

(Between them, they bathe the world in its own blood.) 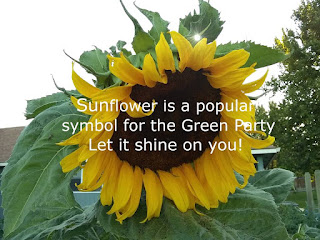 I am a Green.
Give us Greens a forum, a platform to speak from, and will beat you fair and square. I am speaking to the Democratic Party of the United States. joined at the hip to the Republican party, and the need for a new consensus. This was originally a reaction to an article regarding AOC, entitled, "Sunrise Movement takes Green New Deal to a new level." Happy nightmares.


What follows is an edited and expanded edition of a letter that I sent to a group of Democrats pushing AOC's Green New Deal. and discussing "problems," they faced, including the party's felt need to overcome far left members of the Democratic Party itself. Please note that I do not oppose AOC's Green New Deal, although I don't think it goes far enough. Here is why: 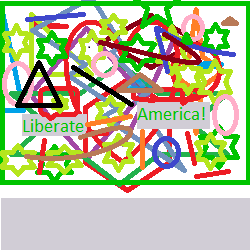 Please allow me to be Frank about the Democratic Party (and by implication, the Republicans and the duopoly). The Democratic Party is historically considered the party of the left in the United States, but now the DNC needs to stop using progressives and to start listening to them.

Practically speaking, I think the base of the Democratic Party is ideologically left  of the Democratic National Party (DNC), and that the DNC has effectively alienated so many progressives as to actually swell the ranks of other parties, including my own party (the Green Party).

Identifying lefty Dems as "a problem" is a mistake: Rather, the far left offers a solution to real problems plaguing almost every American.

The DNC, historically, talks progressive but votes for bloody repression globally. Many are crying out for our government to shape up and serve the masses, to control corporations and banks, to require fiscal responsibility of the military, and to put an end to the long, brutal, demonic, history of American interventions in Latin America and elsewhere. Unfortunately, the Democratic Party does not offer an alternative to perpetual wars, bloodletting, and relative austerity for the poor. Even the supposedly green, Green New Deal  will likely ignore the root of the evil.

As I recently wrote to Senator Joe Kennedy III, the problem in America is due to the system itself. So long as the DNC sees its role as to defend Capitalism globally, and promote corporate interests nationally and internationally, you will have a divided party. You cannot play both ends against the middle and call yourselves "moderates," because the system you have created is putting the globe at risk. You are trying to solve the climate crisis with AOC's GND, without acknowledging that the crisis is systemic, that the Democratic party has supported every bombing, every mutilation of children and civilians, the over-extraction of resources, as a necessary for the American dream, for American exceptionalism.

Sadistic wars hidden in plain view
How many Democrats even know that the United States secretly dropped more bombs on Laos in the Vietnam era, than all of the bombs we dropped on Japan in WWII?  That the few in Congress who knew about Laos at the time, thought we were merely "supporting" the Laotian government? Or that it was the beginning of what are our now global, covert wars? The number of US military bases or installations around the world has been reported as anywhere from 30 to 800, depending on what you count as a base or installation.

But here's the kicker: The secret war on Laos was approved or allowed by one who was, arguably, the most progressive of American Presidents: John. F. Kennedy.

Our covert wars, then and now, often fought unofficially by secret armies, are hidden from Congress and the American people, who do not even know that we are at war with something like seven nations. Technically , we no longer fight "wars." Declared wars, authorized by Congress, are almost a thing of the past. In Laos, where in 1969, 97 percent of Laotians had witnessed a bombing attack, we were not "at war." We are not presently at war, yet there are 74 nations where the US is fighting or “helping” some force in some proxy struggle. (Kurlantzick)

The Democratic Party has supported virtually every heartless, sadistic, US military action around the world. With military bases in something like 80 nations, the USA's default is now mostly covert wars that even the President cannot keep track of, and in some cases over which virtually nobody has information, let alone oversight. We don't even know what our own nation is doing internationally. We now fight undeclared wars, not with the military, but with NGOs, mercenaries, and unaccountable, shadowy private armies and contractors flying below the radar of public scrutiny. None of which are necessarily approved by Congress. And the DNC helped create and continues to support all of this.

The United States is known internationally as an insane, loose cannon that endangers everyone. We now have a so-called "war on terror," yet our nation is known worldwide as the biggest purveyor of violence, and of terror. We saw the terrorist, and he was us.  And the Democratic Party colluded to create this monster that is liable to eat all of us alive in the service of profits. This is something that I cannot support, that I must resist. That's why I am a member of the Green Party. The Green Party and the lefties of your own party are not the problem: We are the resistance to monster of global terror.

As national and global problems worsen, largely due to the short-sighted promotion of unbridled Capitalism, I expect a third force will arise, calling for common sense, decency, and responsibility in government. Common sense with regard to the environment, decency with regard to other peoples of the world who may entertain different economic models, and and responsibility with regard to the military. Our system, which has been hijacked for private interests and capital gain, must be transformed into an agency of service to humanity. The responsibility of government, in the future, will be seen as to provide for the health and general welfare of our citizens, yes, but also to become a contributing part of a global community and an observer of international laws.

It is past time to tear down the false dichotomy. The Blue and Red duopoly no longer serves us, if it ever did. The time has come to replace it with a national consensus built, not around alienating political and ideological centers, but around human needs.

A new national consensus should place humanity at the center, with a balance between individual freedoms and common requirements. In the end, we will find that good government is about providing for people -- for all the people, not just a few.  No more red and blue , but a rainbow of colors. No more duopoly but an open system where the best ideas can gain currency. Not destruction based on outmoded ideologies, but peaceful coexistence. In the end, we will not be made safer by bigger bombs, but by better ideas, bigger hearts, and the hardest work of all: Saving earth from mankind's assaults, and negotiating fair deals for all of the world's stakeholders.

My personal opinion is that we should consider changing "Old Glory," or as some would call it, "Old Gory." The symbolism is dated and deceitful: White for purity, adjacent to red for blood, and blue for the blue heavens or high ideals. It is all so hypocritical, given our national history of conquest, murder, and acquisition by force.

Blue woman versus Red Male (Or orange male, as the case may be.)

To end the Blue-Woman/Red-Male system of wars and oppression, we must create a humane national agenda, and then go forward, possibly with a new flag. Sadly, we have desecrated our flag. Red for courage has come to symbolize blood spilled to promote the acquisition of other people's property, blood of innocents (children and civilians) as well as soldiers in Laos and so many other places. This blood defies credibility of the white stripes, symbolizing purity. There is nothing pure about an aggressor nation. There is nothing courageous about killing family members of people of interest when doing so with drones from dozens (or thousands) of miles away. There is nothing heroic about bombing children on the Plain of Jars in Laos. There is nothing idealistic (the blue symbolism) about attacking nations to rob them of natural resources. The copious shedding of blood obscures the blue of heaven and heavenly ideals, symbolized by the blue stripes. We can do so much better better.

The monsters that represent us, must become things of the past. Our supposed ideals must be revealed for what they are before we can repent and heal. The duopoly must move over and allow independents and third parties to forge a new alliance. The red and blue must allow the rest of us into the national debates. Give us a forum and we will be you fair and square.

Frank Ellsworth Lockwood is Membership Coordinator for Green Party of the Mid-Columbia He holds a Masters Degree in Education and has worked in fields as diverse as logging, landscaping, teaching, and news reporting (for a small daily newspaper. Thank you for  reading.)